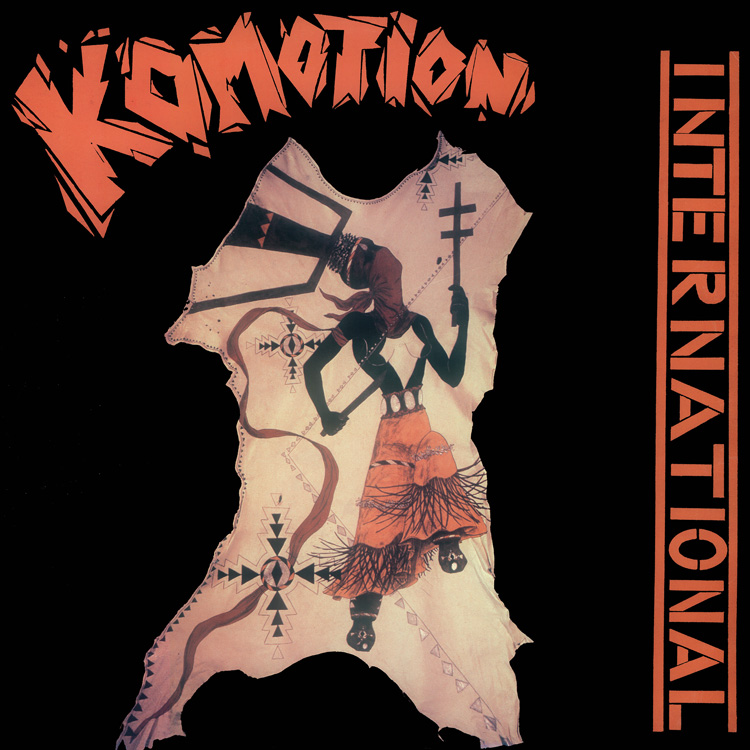 A collection of 11 years of music, graphic art, and publications created from 1986-1997 in the San Francisco artists' collective, Komotion International. This collection reflects the social currents of its time, is an important part of the history of San Francisco's music, art, literary and political scenes, and can offer a vital perspective on the emergence of diverse cultural contributors as part of the public record.

Komotion International Archive
Looters Back From Nicaragua
by Looters
movies

A collection of 11 years of music, graphic art, and publications created from 1986-1997 in the San Francisco artists' collective, Komotion International. This collection reflects the social currents of its time, is an important part of the history of San Francisco's music, art, literary and political scenes, and can offer a vital perspective on the emergence of diverse cultural contributors as part of the public record.

Between the years 1986 and 1997 a San Francisco artists' collective called Komotion International operated a performance space, art gallery, and recording studio at 2779 16th St. in the heart of the Mission District. During this period they published 10 editions of the Komotion Sound Magazine. This was a print magazine accompanied first by cassettes, later by CDs. The recordings that provided the material for these publications were made at the concerts held at the Komotion space. In fact, all of the concerts for 11 years were dutifully recorded. In addition, there were two compilation albums produced, Komotion International Vols. 1 + 2. as well as an album of poetry called "Native Tongue". These were made in the recording studio. The print magazine contained poetry, essays on artistic and political themes, summaries of outstanding performances at Komotion as well as photographs, collage art and representations of art exhibited in the gallery.

Among the hundreds of concerts, poetry readings, exhibits and parties were a large number of benefits for organizations running the gamut from Food Not Bombs to La Casa de las Madres (a battered woman's shelter). In fact, approximately two thirds of the events staged in Komotion's 11 year history were held to support other organizations. These were mainly artistic, political or social welfare groups active in the Bay Area. For this effort Komotion was awarded the San Francisco Bay Guardian's GOLDIE Local Heroes Award in 1992.

Also noteworthy were the dozens of outstanding exhibitions held in the gallery. These included works by Winston Smith, Sal Garcia, Richard Olsen, Doug Minkler, Thomas Powell, Sue Coe and Frank Garvey among the better known artists. What made the gallery special, however, was its close connection to both the community of the Mission District and to the other arts given expression at Komotion. Thus there were exhibitions by young muralists from the Mission District accompanied by Salsa and hip hop music performed at the opening. Also, there were events organized by artists teaching in public schools which brought together young people to display their work, often for the first time publicly.

Musically speaking, many fine artists performed or recorded at Komotion. The list is long and contains some who've become world renowned. Green Day, Michael Franti, Chumbawumba, Primus, Chuck Prophet, Consolidated, the Looters and many other musicians contributed greatly to the spirit and vitality of Komotion. They were joined by poets such as Jack Hirschmann, Alejandro Murguia, Robert Anton Wilson and Peter Plate as well as performance artists from Jello Biafra to Guillermo Gomez Pena. Even more significantly, the range of performance was extremely broad including flamenco and bhuto, hip hop and african, jazz and classical, as well as the wildly experimental that defies categorization. This, more than the fame of some of the artists was what characterized Komotion International. This is its legacy as well.

How can we evaluate the historical and artistic significance of Komotion International? To begin with, any researcher be they a general or an arts historian with a specific interest in San Francisco in the years spanning the 1980's and 1990's cannot overlook what is in this archive. First, because it is characteristic of the social currents of that time and place. Indeed, Komotion helped shape those very currents. Second, because of the intrinsic value of the music, graphic and literary work, some of which is of the highest quality. Just as many books and films have examined San Francisco in the Sixties, the time is fast approaching when similar interest will be paid to the decades that followed. While Komotion may not have gained the world renown that, for example, the Fillmore Auditorium did, it nonetheless played the same vital role its more famous precursor did. Certainly none of the thousands of artists and organizations who participated would be in any doubt on this score. Perhaps even more important, however, is that preserving the wonderful creative expressions that were captured in recordings and in print is necessary for the general public of the future. While determining artistic quality may be a matter of taste, it is indisputable that the archive contains timeless performances that will inspire and inform listeners in the years to come.

Making The Komotion International Archive Available to the Public

Since the end of Komotion International's operation in 1997, the archive has been preserved by one of the founding members of Komotion, but it is not accessible. Approximately 1,000 hours of music and other performance exists in the form of DAT tape. In order for it to be included as part of the public record, it needs to be transferred to audio files, catalogued and made available to the public in two ways: via the internet and at a suitable museum or like institution in San Francisco. In addition, to be made available to researchers and the general interested public, the print editions of Sound Magazine as well as all the graphic art used in album cover illustrations, show announcements, etc. need to be scanned and offered by digital as well as terrestrial means.

While much of the material could well be interesting to an international institution, there are two institutions in San Francisco the material should be presented to first. They are best suited for the purpose as they are located in San Francisco, the city of origin of the material in question. Also, they are equipped with the necessary staff and infrastructure to properly care for and exhibit the Komotion Archive. This includes both ready access for legitimate interest as well as protection from misappropriation or misuse. These are the Internet Archive and the Museum of Performance and Design. We have already made some initial inquiries with these institutions and there is interest among the staff in providing a "home" for the Komotion Archive.

Mat Callahan, one of the founding members of Komotion International, has undertaken the preservation and archiving of all this material. He is also the person best qualified to identify the performers, the dates and other relevant information in the process of assembling it. Furthermore, Mat negotiated the terms on which the music was to be made available with the performers on the recordings so issues of copyright and appropriate use are his responsibility. Since he moved to Switzerland after Komotion decided to close its doors, he brought the materials with him in order to personally ensure their safety.

The terms agreed to by all the artists involved were the following:
Use of the unique recordings included in this archive is limited to that for which they were made, namely, in support of Komotion International's collective effort. They were, in effect, donations to a nonprofit arts organization to be used in this context and no other. Therefore, the music and text recorded here belongs to the artists while the unique recordings originally published by Komotion International and now preserved as part of the Komotion Archive Project belong to posterity as represented by the Komotion Archive Project and the institutions that will supervise public access. This necessarily precludes the commercial exploitation of all or part of what is contained. If at any future date other use is to be made of all or part of what is contained in the archive permission must be granted by the individual artists in question. Therefore, if one band or performer wanted to make a commercial release of their own music housed in this collection they would be free to do so. But no one else, including the Komotion Archive Project, can do so without prior informed consent of the artists.

This, it should be noted, is in keeping with the standards set by institutions such as the American Folk Life Center, Library of Congress. All matters of a legal nature have been researched through this organization in direct consultation with its former director, Dr. Peggy Bulger.